Doo-Dad is a particularly intelligent and ambitious mimic with an insatiable desire to collect and catalogue items and objects from across the planes. He has built a truly impressive and uncontested hoard of miscellany in his demiplane, known as the Array, which includes anything from tchotchkes, furniture, tools,art, treasure, equipment and whole buildings.

Doo-Dad is generally affable to guests to his domain, making a big show of playing host and showing off his magnificent collections. He has vast knowledge about his collection, and will go on at length about the history and story behind each item. He will be impressed by guests with good knowledge of and eye for craftsmanship, art, and historical objects, but quickly loses his patience at guests that don’t show a proper level of awe, respect and admiration for himself and his collection.

Ultimately, he desires to continue to grow his collection and the Array, and won’t hesitate to use underhanded tactics to do so. He and his minions make frequent trips to other planes to steal more items, often by using their shapeshifting to infiltrate and ambush their current owners. He is intelligent, but overconfident, and often blinded by his greed and desire to grow his hoard. He is zealously protective of his items and is unlikely to part with any willingly, unless desperate. However, he may be inclined to provide “gifts” to guests that are actually mimic spies.

He has honed his shapeshifting skills beyond what most mimics are capable of, able to make drastic changes to his size and mimic multiple objects simultaneously.

Doo-Dad’s home is known as the Array, a demiplane built bit by bit over dozens of years through the amalgamation of countless smaller extradimensional spaces, such as those from unattended bags of holding, rope tricks and handy haversacks. The magic that makes this possible without creating tears into the astral plane (most of the time, anyway) is thanks to an artifact known as the Bobbin, one of Doo-Dad’s first acquisitions and his most prized possession. Created by the Lich that oversaw the dungeon where Doo-Dad was born, The Bobbin was stolen by Doo-Dad during the chaos of a failed uprising led by the goblins of the dungeon.

The patchwork nature of the Array makes for a strange and unstable topography, with uneven chunks of space stitched together like the tunnels and chambers of an ant colony. Many chambers are full of mountains of objects collected by Doo-Dad and his minions, yet to be sorted, cataloged and moved to the proper gallery chamber. Other chambers are for the mimics and other dungeon creatures that Doo-Dad rules over. The largest chamber is tens of kilometers square, and houses the gallery  where he keeps his favourite possessions, rivaling any museum or collection you might find elsewhere.

The plane itself is unstable, straining under the weight of so many extraplanar spaces bound together. Tunnels sway slightly in the astral breeze, and chambers contract and expand as if the whole plane is breathing. Occasionally, the sound of tearing fabric echoes through the plane. Lately, the seams have begun to come loose, and some chambers have torn off or ripped open, pouring a torrent of objects into the astral sea. When a new extraplanar space is attached to the array, it is often a violent matter, with objects (and residents) of the new space being tossed about in a storm of planar energy, much to the dismay of any adventurers that happen to be in the area. 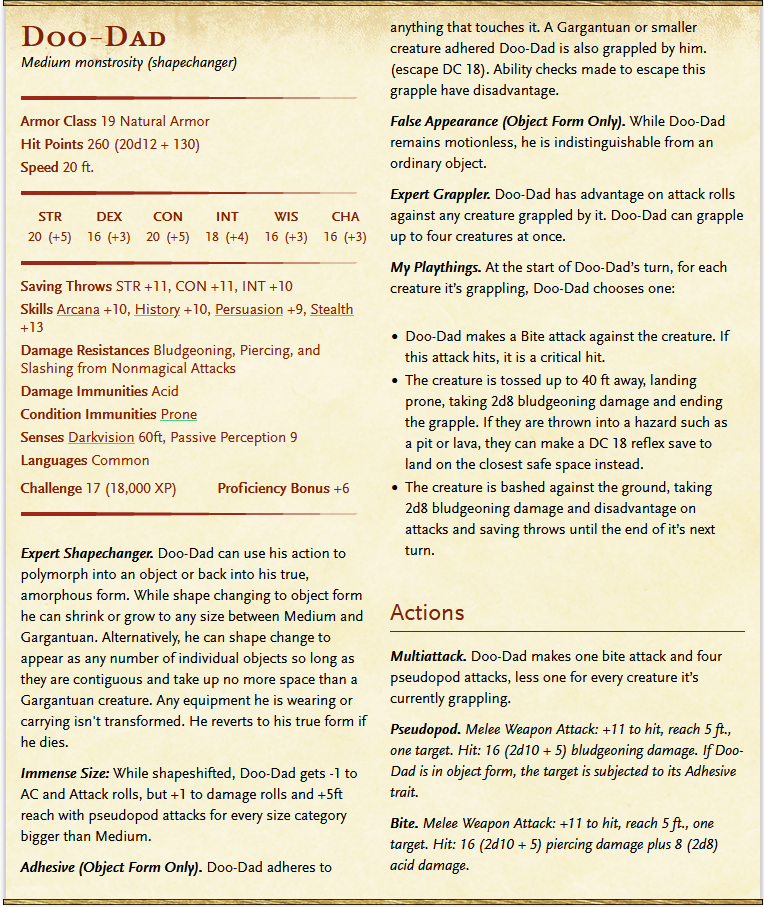 While within the Array, on initiative count 20 (losing initiative ties), Doo-Dad can choose one of the following effects:

Reveal mimic. Doo-Dad chooses a creature within 120ft that has taken objects or items from within his domain. Those items are revealed as having been mimics all along! This has a different effect based on the type of item taken:

The Bobbin is a spool of translucent, silvery thread that glimmers in the light. It allows it’s owner unparalleled control over extradimensional spaces.

While attuned to the Bobbin, you are aware of the location of any extradimensional spaces within 1 mile of you.

The Bobbin has 10 charges which can use for the following abilities:

The staff regains 1d6 + 4 expended charges each day at dusk. If you expend the staff’s last charge, roll a d20. On a 1, the staff crumbles to dust and is destroyed. Additionally, all extradimensional space within 120 ft is destroyed and a gate to the astral plane is formed, sucking all items and objects to a random location within the Astral Plane. The gate then closes.